All of this to make a pie? Rendering Lard

Update: In the almost three years since I wrote this, I’ve learned a lot more about rendering lard. There are all kinds of great tutorials on it so I won’t bother adding another; instead I’ll just add this note. First, get pastured (not to be confused with free range) pork if at all possible, organic is important but pastured is more important. It’ll smell and taste better while being better for you. Then just render it in a pot on low heat on your stove because it won’t smell. Second, ask for leaf lard,  especially if you want to back with it as it has no pork flavor. Third, Cracklings. They are the left over crispy bits. Add some salt and they are so delicious. Fourth, throw out any old ideas about fat-free and enjoy, because fat, saturated fat, is actually good for you!

As I have been learning about food and how it is processed and the effect it has on our bodies and our world, my thinking has changed drastically. As have our eating habits. I have a few “old” ways that I cling to. I was talking with a couple of friends last night about how I still really love good ol’ white sugar in my black teas…and I like black teas. One of the other things I have clung to is my pie crust. Well, I should say, my mom’s pie crust. It tastes really good and it works well for savory and sweet alike. However, I use vegetable shortening in it and I don’t want to use that any more. It wasn’t much of a problem because I rarely made pies but we have discovered that we like quiche so a change was needed. My first thought was to get lard from the store, but I have read that there other oils added. So I had an inspiration at the farmer’s market in the city when I saw a stall selling range fed, antibiotic/hormone free pork. They said they sold lard but I discovered that meant they sold un-rendered pig fat.  I decided that we were up to the challenge so I bought 15 lbs of it.
I thought I would share a little about the process complete with pictures….really it isn’t so bad. This is the crock pot method, but we are in the process of doing a stove top method too (actually barbeque). 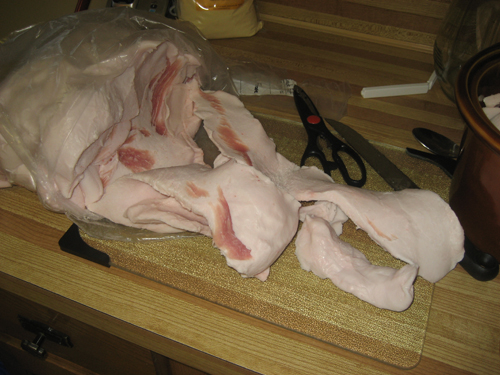 First I washed everything with HOT soapy water and cut it up into chunks (and discovered after that I should have cut it up smaller). It should be an inch or smaller. 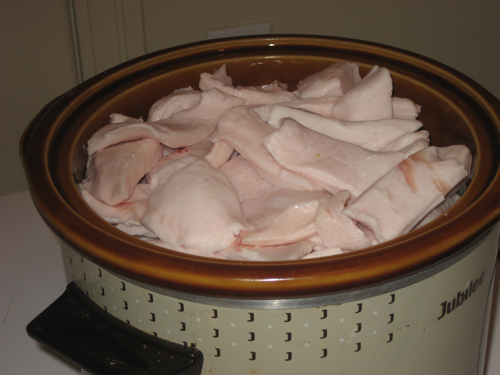 Turn the crockpot on low and cook away. I had mine inside for a very short time and then I put it outside so that it wouldn’t smell (this only works on a warm day though). I stirred it a couple of times but I don’t think that you even need to do that.

From what I read, it is done when the cracklings (Little House in the Big Woods, anyone?) turn brown and float on the top. I don’t think this is going to happen in the slow cooker (why we are trying the next batch in a pot). If you leave it too long after this they will sink and apparently it will be more “porky”.

I realized later that I jumped the gun a little and could have gotten more lard out of this batch but it was a learning experience. 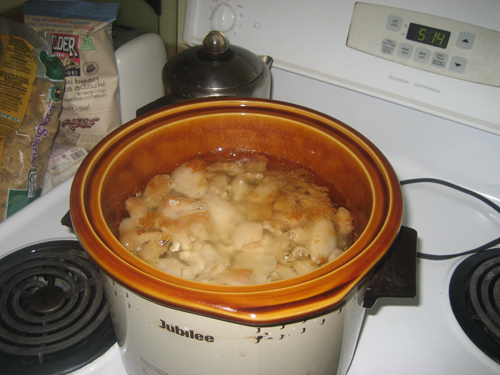 Our finished product turned out pretty clear and we just poured it through a wire strainer into jars that I washed in HOT soapy water and then sterilized with boiling water. (I may be paranoid but I don’t want to risk contamination.) 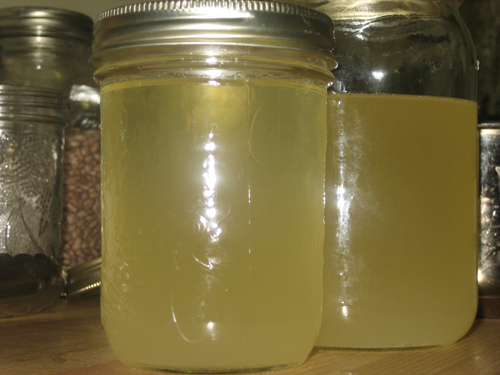 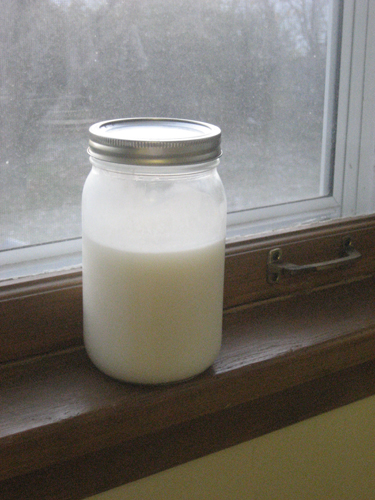 Put it in the fridge and in the morning it had cooled to look beautifully as it should. Can I call lard beautiful?

Now it is time to just wait and see how the two batches compare. And I found a gluten free  pie crust recipe that I am going to experiment with (explanation coming) in the next few days.