So just a little poll here. I made this birthday banner 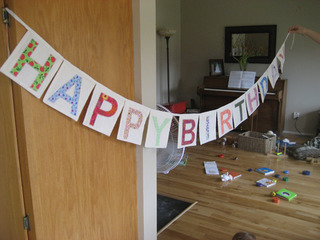 for Aneliese for her first birthday and to become a family tradition. I have had at least 20 people ask me about buying one since then  and I was planning to put them on Etsy. Alas, I discovered that what I had thought I would sell them for would cause me to lose money basically so I gave up that idea. Then again lately I have had a few ask about them so I started thinking on it again. And just thought that I would throw it out there.

What would you pay for a birthday banner like this? Answering this question in no way indicates to me that you want one, so don’t feel any pressure that way. And you won’t offend me by suggesting lower than what I have thought.  I just really would appreciate some feedback so that I can decide if I am going to scrap the idea all together or consider charging more than I had planned.  I just feel like I have a hard time deciding with stuff like this because I always just think that I would make it myself and I would rather not try to sell them than put a price that people wouldn’t be willing to pay.