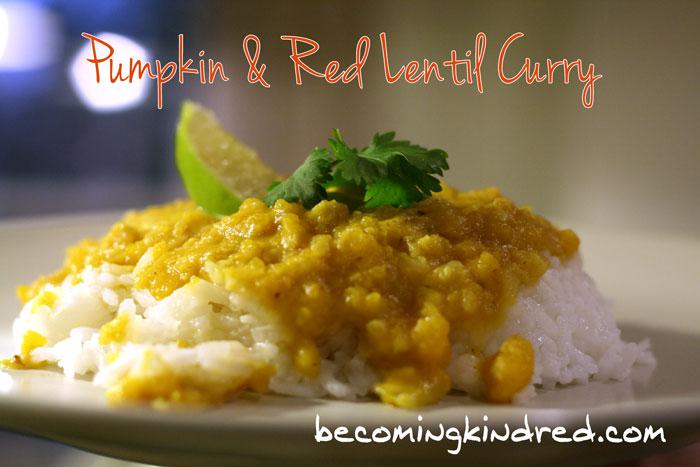 Lentils are a relatively new addition
to our family menu. Other than enjoying them in the dal that our friends made
whenever we would share an Indian feast, until this past year, they weren’t
legumes that I had cooked with much. However, they have become an important
player in our meal planning both for taste and budget. As a source of protein for those with a limited budget, I’m pretty excited about
this recipe. Because I use my homemade chicken broth, there is even greater inexpensive  nutrients added.

Pumpkin and squash are some of our main nutrition packed vegetables through out the winter.
We grew most of our own this year from local heirloom seeds so  I have also been saving seeds as we use up
the squash. Unfortunately, we lost several squash due to an extreme temperature
change while we were away but I was able to save quite a lot by cooking and
freezing it right away.

Anyways, on to the recipe! Pumpkin and Red Lentil Curry is currently one of our most favorite meals.  It has so much flavor and works well with a
variety of squash as well as pumpkin. This is quite a big recipe and while I
can’t tell you exactly how many servings, I can tell you that we get two
generous meals for the five of us plus enough for lunch. It freezes very well
so I always put one jar in the freezer for a busy day in the future. It doesn’t generally stay in there for long.

1.
Combine
spices (including ginger and cloves) in a small bowl. Do it! Or at least have
them all together on the counter or the same searching frenzy that I
experienced the last time I made it will happen to you!

2.
Melt butter in a large saucepan (I
use my cast iron.) and sauté the onions until tender.

3.
Stir in pumpkin and spices  cook for 30 seconds, stirring constantly.

4.
Add broth, bringing to a boil. Cover
and simmer until pumpkin is tender. About 15 min.

5.
Stir in lentils and continue to
simmer until the lentils are tender.
About 10 minutes and I mush up any remaining chunks of pumpkin/squash.

7.
Serve alone or on rice. I like to
serve it with a sprinkle of cilantro, a lime wedge and a dollop of plain
yogurt.

·      *   Ideally, the lentils should be soaked
for several hours as they are high in phytic acid which doesn’t allow our
bodies to absorb the nutrients in the same way. “In
general, soaking beans and then cooking removes about 50 percent of phytic
acid. One report with peas and lentils shows that close to 80 percent of phytic
acid can be removed by soaking and boiling. Boiling beans that haven’t been
soaked may remove much less phytic acid.” (See Weston A Price link for detailed
explanation).  I’ll be honest and say
that I often forget these days but ideally, I put them to soak in very warm
water with a splash of vinegar (maybe a teaspoon) for about seven hours. It’s
an especially important step though for the green lentils.

·      ** I have also often used squash that I
had already cooked, in which case, I just add it and the lentils together. This cuts down the cooking time.

Do you have a favorite lentil or squash recipe? Please share it in the comments!