Playing with Balloons: Toward Independence 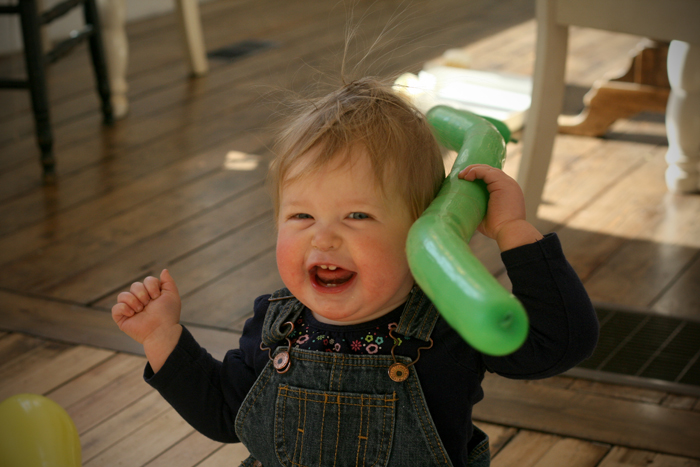 Kathleen had just woken up from her nap and immediately
found the balloons that the big sisters had forgotten to put away after playing
with them. Aneliese and Cecily love playing with balloons but with Kathleen’s
propensity to gnaw everything, I’ve told them that they can only have them out
when Kathleen is napping. But she found them and was positively delighted. I
immediately went to take them from her and offered her some nice smooth rocks
instead (we’re creative with toys round here). Her response was to maintain a tight
grip on the balloons with one hand while taking the rocks with the other. No,
she wasn’t going for it! Still clinging tightly to the balloon, she offered me
one rock and then the other. Each time she closed my hand around the rock as if
to say “no thanks Mama, you keep them.”

By this point, I had of course gotten the message that what
she really wanted was to play with the balloons and it suddenly occurred to me,
“Why don’t I play with her?” Brilliant, I know.  For about fifteen minutes, I sat on the floor
while Kathleen thoroughly enjoyed playing with the balloons. She rubbed them on
her hair, bopped them together, bumped me with them, and learned to keep them
out of her mouth.

Because I tend to over think everything, including simple
playing with my kids, I saw something more clearly about my role as a parent.
Part of my role in their lives is to walk with them through the tough stuff,
the scary stuff.

Kathleen on her own can’t play with the balloons. It’s not
safe and it’s just a good idea to keep them away from her. But in my desire to
keep her safe, I’d forgotten that she can play with them if I am present and
completely engaged with her play. I can teach her how to play safely while
allowing her to grow and experience something new. Then eventually when she is
older, she will play with those balloons all by herself.  Chances are that, like her sisters, she will
occasionally be too rough and the balloon will pop. She’ll be startled and
disappointed, but she’ll learn.

Maybe I’m crazy but for a moment this morning I saw a
glimpse of my daughters lives. Right now I’m present for most of their moments
and I’m guiding most of their choices as I teach them how to deal with their
emotions, their feelings, and their actions. Oh, they are individual and
independent little creatures to be sure, but they are still looking to me to
set the tone. They still need me to look out for their safety and well-being. I
can kiss their owies, sooth their hurt feelings and walk them through righting
wrongs that they have done but before I know it, they will step away from
me.  They will play with the ‘balloon’ on
their own.  They’ll be able to look back
on the lessons that we’ve learned together, but the choice will be theirs. Most
likely, there will be some popped balloons and some tears as a result. I think
that as their mama, I will long to just gather them close to me and keep them
from any hurt, wrong or poor choice from themselves or others.  Already it’s hard to step back to allow them
to move forward. But here’s the other side of the coin. When I step back and
let them step out, they have a chance to show the character and depth that they
have. They’ll have the opportunity to live out the guidance they’ve been given while growing in their own choices and convictions. 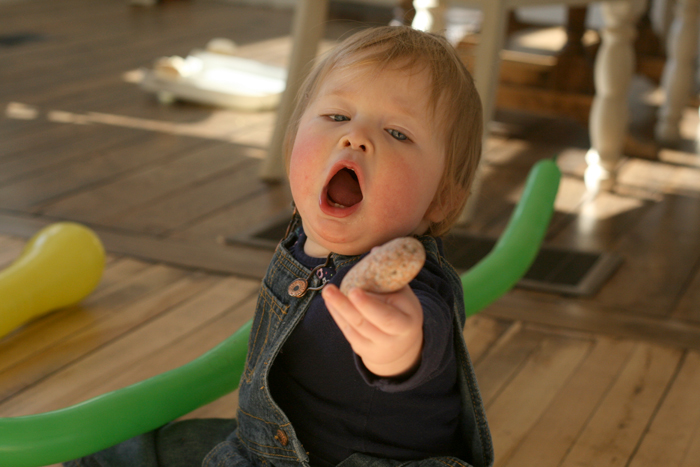 A little sidenote:
There has been a lot lately that has been causing me to really consider
my role of responsibility in the lives of my children as they grow and
I’ve been working through (and will for a long time) how we as their
parents guide their view of themselves, others, and the world. While
we’re instilling in them the responsibility that they have for their
choices and actions, how do we avoid teaching them that they are not
responsible for the choices and actions of others? How do we love wholeheartedly and grace-filled? How do we encourage them in strength and character while not fostering an attitude of entitlement?  It’s challenging me
and I hope that you don’t mind if over the next few weeks, I
occasionally write here about what I’m working through. I’m finding I
have less answers every day but more growing convictions.