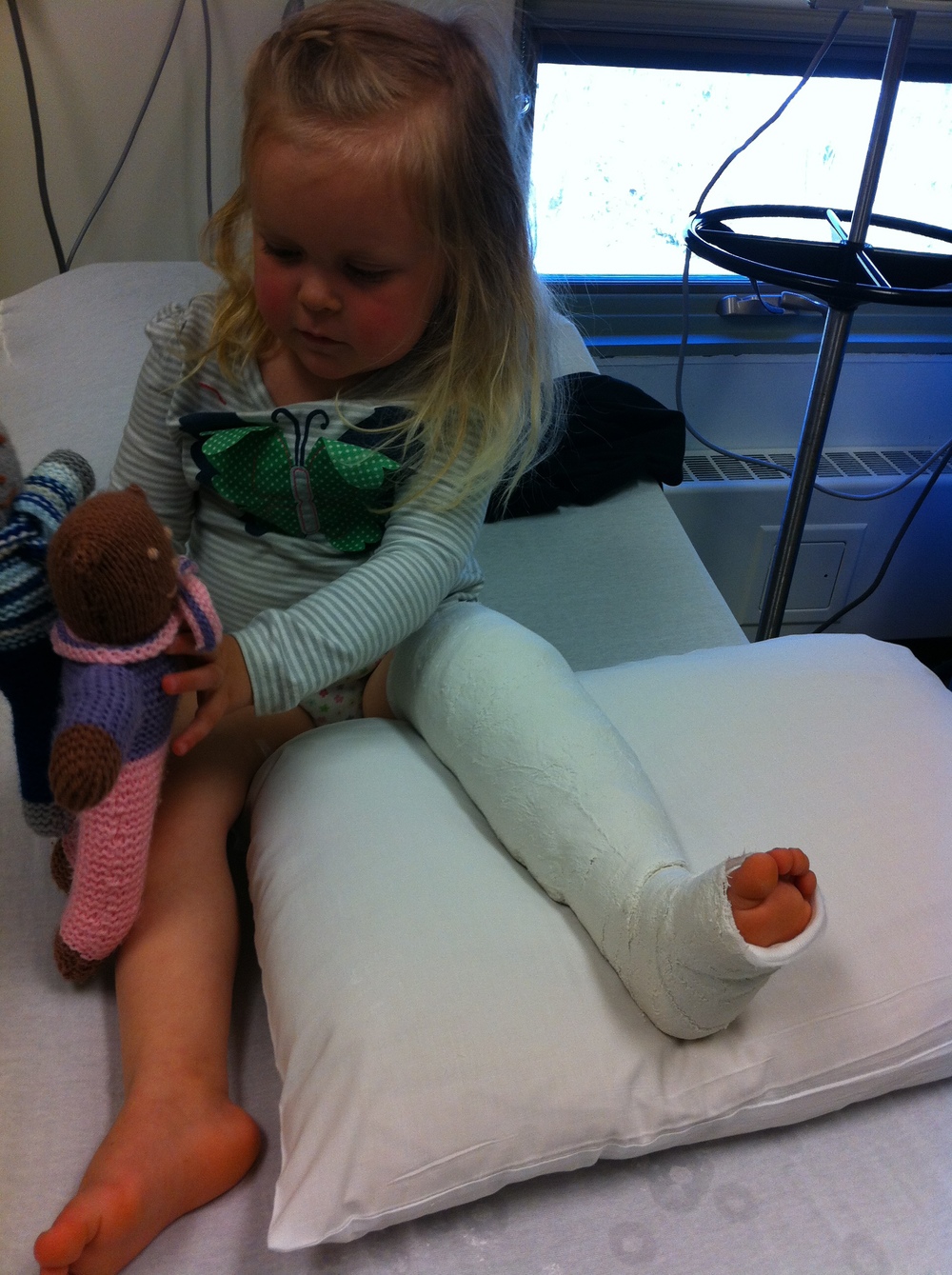 Did I say that Cecily’s leg wasn’t broken in my last post?
Change that, it is in fact broken. Across the tibia and curving up into her
knee. They put the cast on her on Monday and then we were back in on Wednesday
because she had already destroyed the first. The second one seems to weigh
almost as much as her and is intended to immobilize her until Tuesday when she
will have a more thorough assessment at the IWK . I’ve been given more strict
instructions to keep her off of it as the fracture is on a growth plate.

The poor girl,
she doesn’t say too much but she absolutely
hates it. Every so often her face lights up and she says things like
“I’m going
to run out to feed the chickens!” or “I’m going to jump on the
trampoline.”  But then she remembers and
it is so sad. “Will I have to wear this for years and years?” and “I
really don’t love this.” (said in the most mournful voice imaginable.)
Then every so often, she has had enough and she says that she is
taking it off, well cutting it off actually. We’re trying to keep her
involved in everything as we can and
she spends lots of time playing with her little animals out in the sun
but I
know that I am having a hard time keeping everything in perspective so
for a
three year old who has no concept of time or how much worse it could be,
it’s
definitely trying.

Dan and I were wondering though, how experiences like this
are part of shaping a child’s character. How is this being forced to slow down
and watch life more slowly going to impact little Cecily? I especially noticed
it the other day when I took the girls for a walk by the water the other day.
Normally, Cecily is full speed, climbing rocks and doesn’t spend a lot of time
observing so it was interesting how much she observed while Aneliese did all
the climbing. She pointed out different things in the water, noticed shapes and
colors, and talked about sounds that normally she wouldn’t pay heed to. Will
this cultivate an observance in her that she wouldn’t have otherwise?

Cecily is generally very independent. She usually prefers to
do things herself and doesn’t often ask for help. She is however, very quick to
help others and will be the one to run to get something for another or to
observe that someone needs a hand.
Suddenly, she has to ask for help and accept help.

I feel like it also is teaching valuable life lessons not
just to Cecily but to Aneliese as well. Aneliese doesn’t have that same natural
tendency to quickly help others and I’ve been seeing that change this past
week. As she has realized that Cecily isn’t able to do things or move well, she
has become much quicker to get things for Cecily or to help her out; I came in
from milking one morning and Aneliese had actually helped Cecily use the
bathroom (not recommended but it was an appreciated gesture).

That’s my Pollyanna perspective for you and the silver
lining of this particular cloud. I’m not going to bother telling you about how
I feel about the rest of the cloud. It’d be BORING and frankly, kind of whiny.
So for the sake of my readers and my faux golden halo that gets easily
tarnished lets just pretend that I’m Pollyanna, shall we? Though you could pray
for some uninterrupted sleep perhaps for a night or two. That would be lovely.